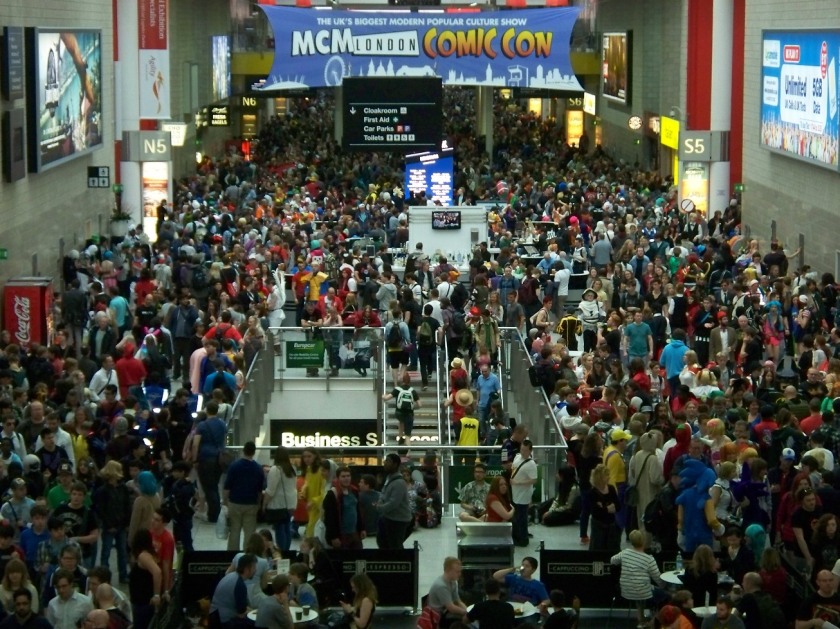 Just the one day at a convention this time around.  This was my first time to the MCM Comic Con London.  I was expecting it to be busy, but it had the London ExCel Centre at capacity.  I also had a first-timer con buddy to introduce to the madness and fun of our little community..  I think he was a little overwhelmed!

Some absolutely brilliant cosplay was on show.  I just wish I could have taken more photos!  I spent a lot of time walking around the stalls and taking a look at all the wares for sale.  There were loads and loads of panels and talks in various stages and rooms.  So many options at clashing times!  I did, however, see a little of the Arrow panel.

It took half the morning just to get a ticket which then allowed you to get an autograph from one of the guests – which was a little inefficient, because the guest I wanted to see wasn’t busy at all during the morning session (because no one could get that far!) and by the time I got my ticket (2 hours later- 2 tills serving thousands of people!?) that session had just ended, so I had to join the mad huddle of the afternoon session.

But it was worth the wait, because the lovely Felicia Day was a joy to talk to.  I got a high-five for wearing my TableTop Season 3 supporter shirt – hooray for all the backers!  She was gushing to me about how they appreciate our support for the show, which confused me a little as I was busy trying to gush over meeting her…!  Still, I hear they’re working on bringing season FOUR to our (computer) screens in the future.  HOORAY!

I spotted a few recognisable faces walking around too.  Mostly they were some of the stars on their way to and from signings or photoshoots: Sylvester McCoy, also Shane Richie & Jessie Wallace from Eastenders were there!  Other times, it was just a famous face who happened to be attending just like the rest of us: Steven Moffat (Doctor Who & Sherlock) and his son Louis!

A selection of my best photos are shown below (click to zoom), and the full gallery can be found on Flickr: 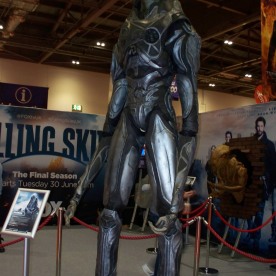 One of the alien creatures from Falling Skies. 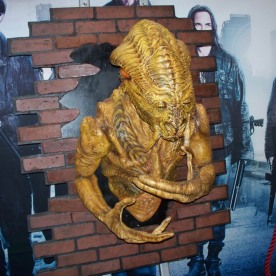 One of the “Skitter” creatures from Falling Skies. 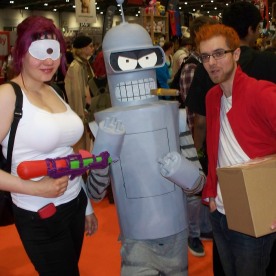 Leela, Bender and Fry (and a box of Popplers!) – Cosplay from Futurama. 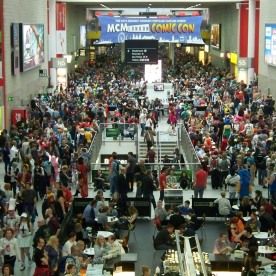 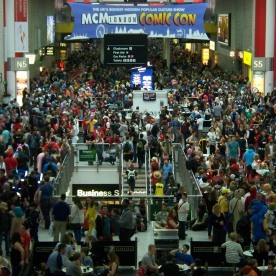 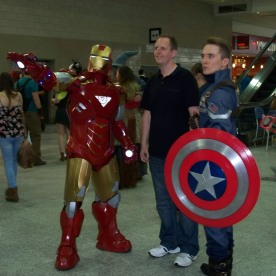 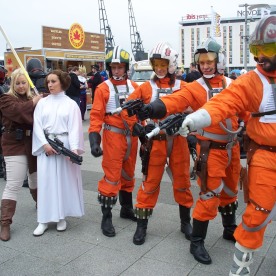 The Force is strong with these guys! Star Wars Rebel Cosplayers. 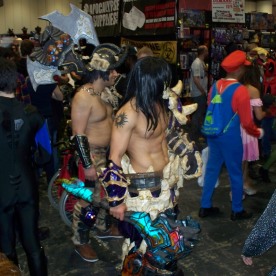 Intricate costumes (don’t know this reference – please comment if you know!) but the weapons all light up. Also, half-naked men are always welcome! 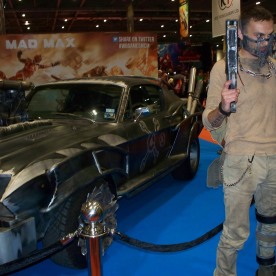 A car on display from Mad Max: Fury Road, with a cosplayer. 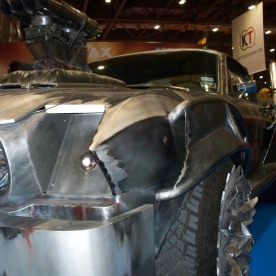 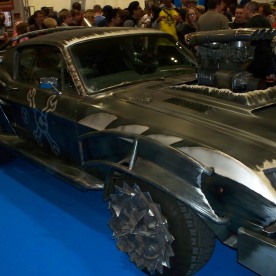 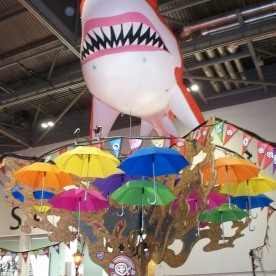 The stalls had some of the best, quirky displays. 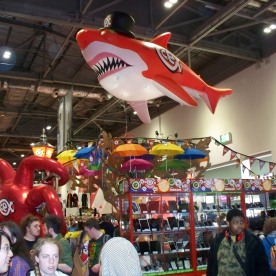 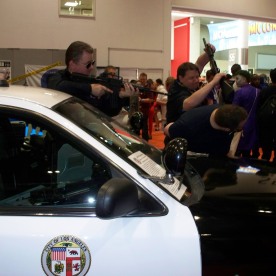 US Police Cars on display. And attendees volunteering to get held up at gunpoint! 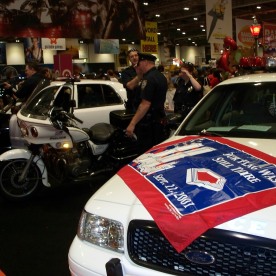 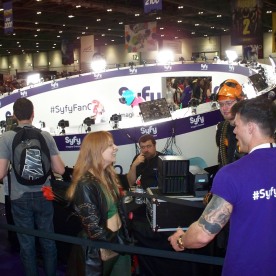 The SyFy Channel “Fan Cam” – a 360 degree camera rig, giving fans and cosplayers the chance to have a clever moving snapshot of them in mid-air; or other poses! 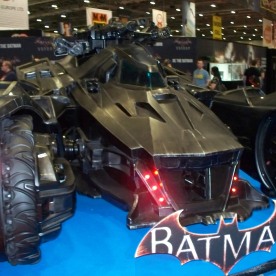 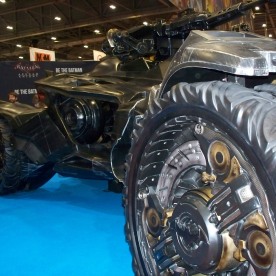 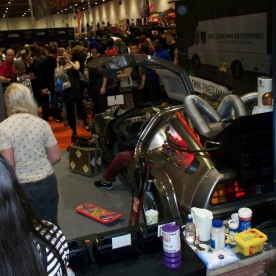 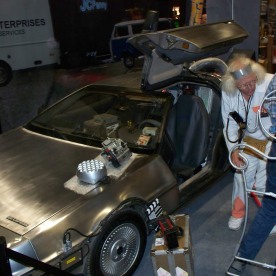 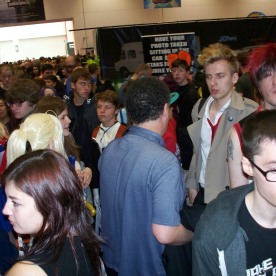 Randomly, I walked past Steven Moffat (Showrunner of both Doctor Who and Sherlock) who was there just as an attendee with his son Louis. That’s the back of his head in the middle there… Honest! 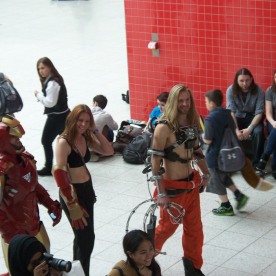 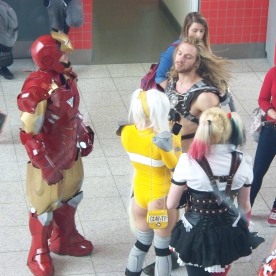 That hair flick was just PERFECT! 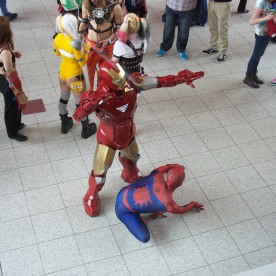 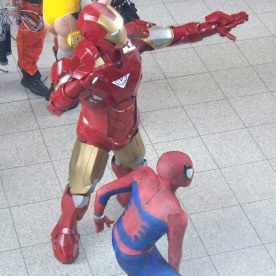 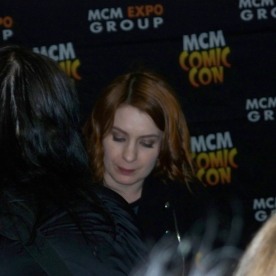 Felicia Day – the only OK shot I managed to get! 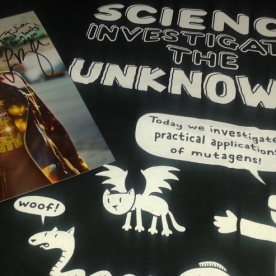