What is now considered an annual love-in for us faithful Fannibals (fans of Hannibal), the Starfury Red Dragon conventions are a weekend outing with no equal. I’ve been to all 4 so far, Red Dragon 1, Behold the Red Dragon, and Red Dragon 3. Celebrity guests this year included the always lovely Katharine Isabelle and Kacey Rohl, the insightful Rutina Wesley, “scarf dad” (!) Tom Wisdom, the brilliant Vladimir Jon Cubrt, the fun Joe Anderson, and the unexpected joy of Ricky Whittle. Ricky, who is Shadow Moon on Neil Gaiman’s/Bryan Fuller’s American Gods (watch it on Amazon Prime in the UK), became immediately one of the Fannibal Family (despite having not, YET, seen Hannibal!), exuded constant enthusiasm and had the ability to make everyone feel included and important. Very little was off-limits with that naughty boy… check out all the various photo ops with the fans on twitter, instagram, and tumblr. My photo is included below… you get the picture.

It definitely was THAT kind of party!

A selection of my photographs are presented throughout, the rest can be found in my Red Dragon 4 Album on Flickr.

Amongst the guests there was a dance-off at every possible opportunity! Who can forget the constant “battles” between Vlad and Ricky?! With a stunned Kacey in the middle at one point.

But the most important element in this fantastic convention are my fellow Fannibals. The fan attendees are by far the nicest bunch of people you’ll ever meet. Massively creative, talented, and generous. The amount of gifts exchanged within and between the crowd is unmatched by any other fan gathering. People spend hours… days… weeks… months even, on art projects and jewellery, and so many other things, that are just shared with love. No other convention does this, and it came out of nowhere from the beginning. Fannibals are simply generous and kind… considering the subject matter that brought us together, you might have expected the opposite!

A selection of selfies with other Fannibals, the wonderful gifts from various attendees, and my contributions, the Baltimore State Hospital for the Criminally Insane Visitor IDs (complete your Hannibal scrapbook with a sticker from my RedBubble page!) and Calligraphy Invitations (congrats if you ended up with a gold one!). Click to enlarge:

Home made ID badges for the Baltimore State Hospital for the Criminally Insane. I brought these with me to give away.

My favourite cosplay of the weekend, Lucy as Anthony Hopkins Hannibal.

Me and crochet (amigurumi) Kaecilius!

A jaunty angle, me & Debbie.

Literally only saw Caitlyn for this image, then missed each other for the rest of the con..

Me & Paul. Catch his awesome artwork as SketchyMagpie & in an up and coming 2000AD comic!

Minus flower crown, but plus Monica!

The wonderful gifts from all the many talented Fannibals. No one could collect everything, there was simply so much!

My Calligraphic Invitation from Hannibal himself! I taught myself Copperplate Calligraphy just to produce these.

Throughout the weekend there were various Q&A sessions with one or two of the guests at a time. My photos from these are within my Red Dragon 4 Album on Flickr. During which we learned that in an early job working in a hotel, Ricky secretly wished to be whisked off to a better life by a rich cougar, “Pretty Woman” style (hence the title of this blog). He also spoke at length about his experiences on Strictly Come Dancing (he was a finalist the year that Chris Hollins won, 2009). So I can check “hugging a strictly-finalist” off my to-do list! He laughs and jokes around 110% of the time, but also is very respectful to everyone around. Rutina Wesley fielded lots of very intelligent questions pertaining to her character of Reba McClane, revealing a lot of depth regarding the relationship between Reba and Francis Dolarhyde. She’s knowledgeable about Shakespeare, and a fan equated Reba’s character with Hamlet’s Ophelia at one point… very insightful indeed! Rutina stated that Reba was her favourite character to have played so far, particularly because she was chosen due to her own acting versatility, and not being typecast in any way.. big thanks to Bryan Fuller for being a fair and honest casting-genius! Tom Wisdom appeared slightly apprehensive at the beginning of the con (the crowd are fans of a cannibal.. what can you expect!) but quickly realised we’re all having a bit of fun, and became much more at home with the title “Scarf Dad”! He sent everyone #ScarfLove on twitter after the fact, and confirming on everyone’s autographs that indeed “it is that kind of party”. The funniest line from Tom, was probably in answer to the question “Why did Dimmond gravitate to Hannibal in the opening party scene on season 3?”. Answer: “Well, you saw the motorbike leathers right?!”. Say No More! I sadly missed much of the Vlad and Kacey talks, but as usual they are both very cute and fun-loving people; acting against each other must have been a blast. Vlad and Ricky seemed to have developed a bit of a competition of one-upmanship throughout the 2 and a half days.. crashing onto the stage of each other’s talks, the previously mentioned “dance-offs” were commonplace, and they were generally trying to each win over a larger proportion of the crowd. Joe Anderson spoke about enduring the makeup for Mason Verger, where taking it off was more traumatic (and smelly!) than putting it on. He frequently transitioned into the Mason voice when answering various questions, and did a few funny lines from the show (“spitters are quitters..!”). He also talked about another show “The River” that I had enjoyed watching a couple of years ago; as well as previous roles including where he’s had to play an extremely violent character, and how people react around you at the time. During Rutina and Katie’s Q&A on Sunday, Tom staged a faked fire alarm just to shake things up – whilst the ladies were trying their hardest to answer a sensible question! Katie, on the Saturday was unfortunately ill, but came back to us on Sunday (and gave us a graphic description of what she was going through the night before!). As a Red Dragon regular (along with Kacey), Katie is as enthusiastic today about Hannibal, AND our con environment, as she was from the very beginning. She says coming to Red Dragon is like “coming home”. She’s always a delight. Bless!

Oh, and to fill in a gap in Ricky’s knowledge… Leighton Buzzard is between Watford and Milton Keynes! He asked me where I was from during the Q&A, and he had NO IDEA where it is! Pop in for a cuppa any time… *wink wink*.

The rest of the weekend was spent lining up for photographs, and autographs, and catching up with my awesome friends, and handing out my own gifts of Calligraphic invitations (from Hannibal), and my ID Badges from the Baltimore State Hospital for the Criminally Insane! I did manage to get on the dance floor for a little while on Friday night, but I have pain issues, and can’t keep it up like all the others! On the Saturday night Ricky also made it onto the convention dance floor – you can imagine how that went…

My paid-for photo ops from across the weekend. Click to enlarge:

I asked for something “a little sexy, maybe?” – Ricky Whittle delivers!

Rutina Wesley & Me, Tara in True Blood, and Reba McClane in Hannibal.

The cover of the Hannibal Cookbook

Autographs are filling up the inside cover of my Hannibal Cookbook.

Sean Harry and the crew from Starfury put on a fantastic convention. They’re intimate affairs, and you get to know the guests on a personal level, and they also begin to get to know you all a little bit. Starfury have got more and more efficient as the years go on, and I can’t fault them for any tiny thing. The stewards are all volunteers, and they do a really brilliant job. Applause and love all round! 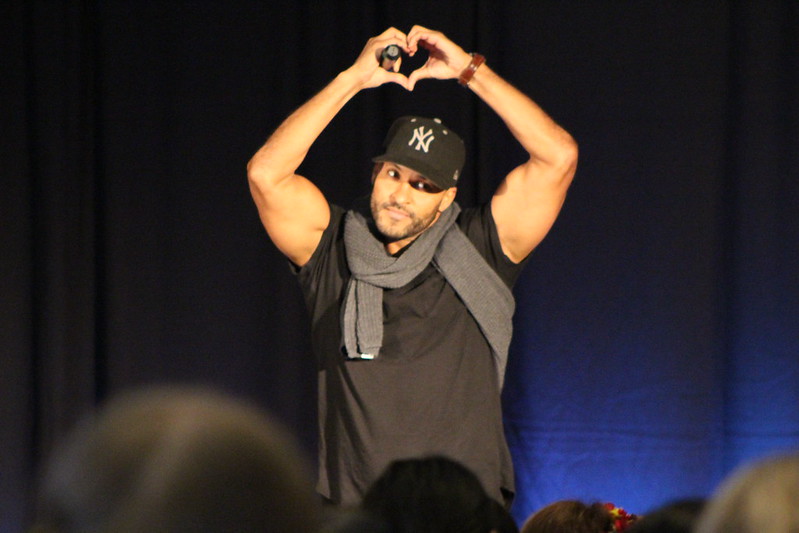 Tickets for Red Dragon 5 are already available from starfury.co.uk!