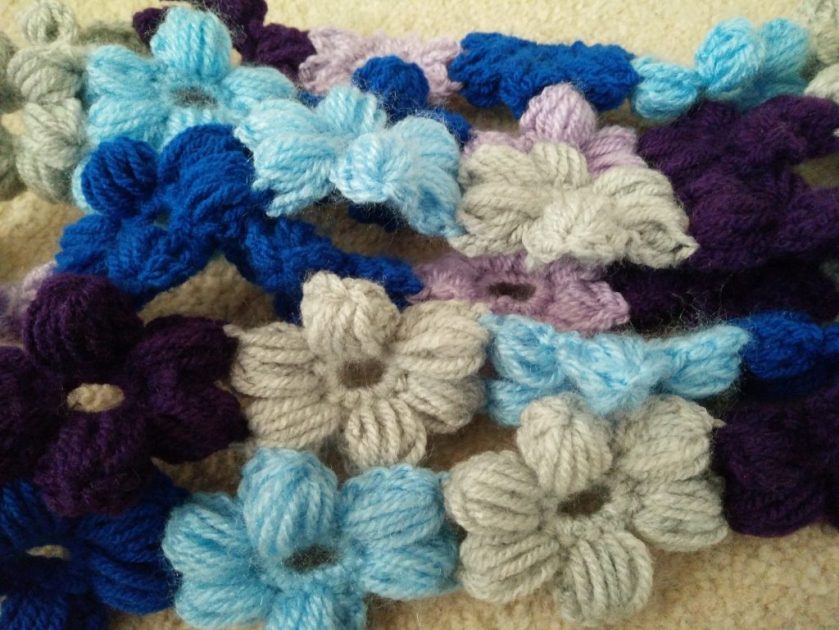 I’ve made a couple of these scarves before for either myself, or presents.  The pattern came from a YouTube tutorial by Meladora’s Creations for Crochet if you want to try it out for yourself.

The original pattern was designed for a scarf with the width of three flowers, which I have made before, and I still use all the time in cold weather, as it’s comfy and warm.  However, just for some decoration, I thought that just having a single string of flowers that I can wrap around multiple times, will make a nice daytime/office alternative scarf.  In the end, I decided on a length of 40 flowers, making it pretty long!  So that I can either have it wrapped around once, with a long trail, or several times for warmth.  I started only by aiming for 30 flowers, but once I’d completed that, I felt like it needed just a little more length! 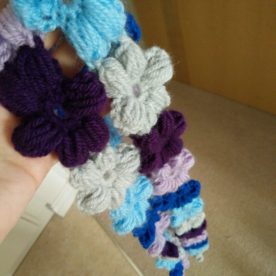 I wanted this one to be quite long, and dramatic. The longer the scarf the more options, and ways to wear. 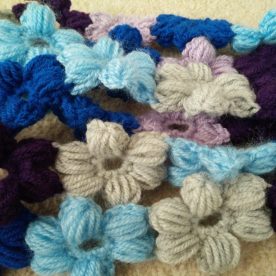 Look at the pretty flowers! 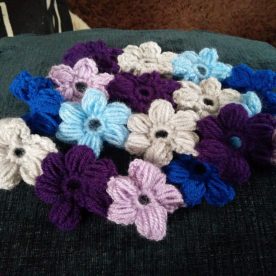 Just after a couple of hours work, the pattern builds up quickly.

Here I used a variety of double-knitting weight yarn, mostly budget varieties from Hobbycraft!  And I used a 4.75 mm crochet hook.  There’s no strict rules in this pattern as to the best yarn weight and hook.  I just played about until I found the right combination to make the size that I liked best.

I always like to choose at least 5 colours, with slight variants of shades.  For the larger scarf with 3 rows of flowers I had 7 colours.  An odd number of shades gives a less-obvious repeating pattern in my opinion.  Sometimes I like to mix it up with some odd clashes, just to keep it interesting!  In this case, I went for shades of blue and purple, broken up with some grey.  I think the end result is quite effective.