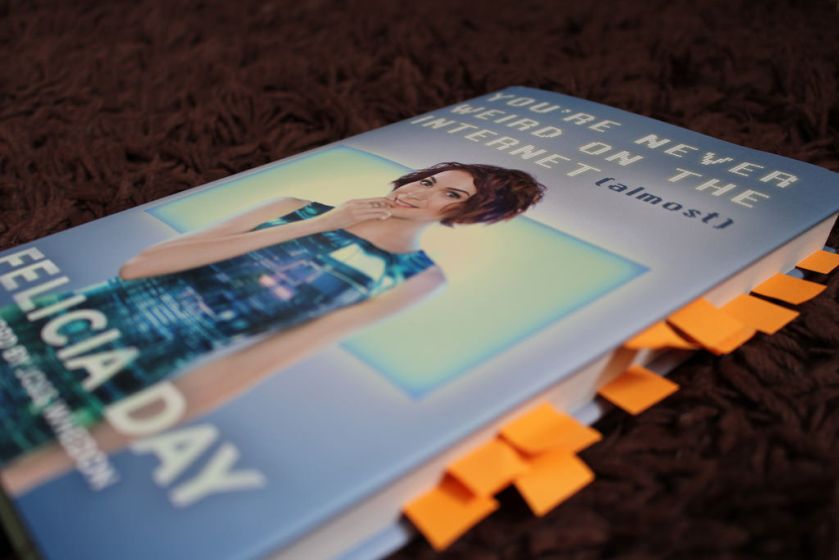 August 25, 2015 crownjulesb Books Comments Off on You’re Never Weird on the Internet (Almost) by Felicia Day

You’re Never Weird on the Internet by Felicia Day
My rating: 5 of 5 stars

I may have read this whole thing in just a couple of hours! An excellent book. It kept me enraptured the entire time. And I *may* have filled the pages with little orange stickies where I found either a passage of profound wisdom, or a parallel with my own life!

Felicia tells the story of how she has come to be the woman she is today. From an unconventional, sheltered upbringing, through various hobbies, violin performances, reading and study. Lots and lots of reading and study. And music. Did I mention the violin?!

Told using her very unique voice and insight. Felicia describes how her persistence, not letting go of the rights to her creation: The Guild, ensured the truth within that story was not diluted in any way. They retained the creative freedom they needed to make The Guild Webseries exactly what it needed to be. Before crowdfunding was a thing, Felicia was doing it. Before making webseries was the thing – before YouTube even found it’s feet in the world – Felicia was there at the beginning of it all. In fact, it could be argued that she was one of the progenitors for the internet blogging/vlogging/YouTuber culture we have today. Did you see “Dr Horrible’s Sing Along Blog”? No? OMG, Where have you been!?

Felicia also shares many of her personal struggles, with frank honesty. I shed a tear once or twice, as I felt like just a little bit of a kindred spirit; especially when describing how anxiety can be a crippling force in your life if you let it take over. There’s even a story of addiction (but NOT that kind..) read it for yourself.

I had the pleasure of meeting Felicia at MCM Comic Con in London, this May 2015. And despite only having a minute or so to speak to her (I got a high five for wearing my TableTop Season 3 Supporter T-Shirt! – I’ll dine out on that story forever!) I can confirm that she is simply a kind, genuine person. Endlessly enthusiastic about her craft. And a shrewd businesswoman to boot.  After the success of The Guild, she began building up a huge following with the Geek and Sundry media empire, along with Wil Wheaton, and many other behind the scenes supporters.  Geek and Sundry is now a subsidiary of Legendary Pictures.