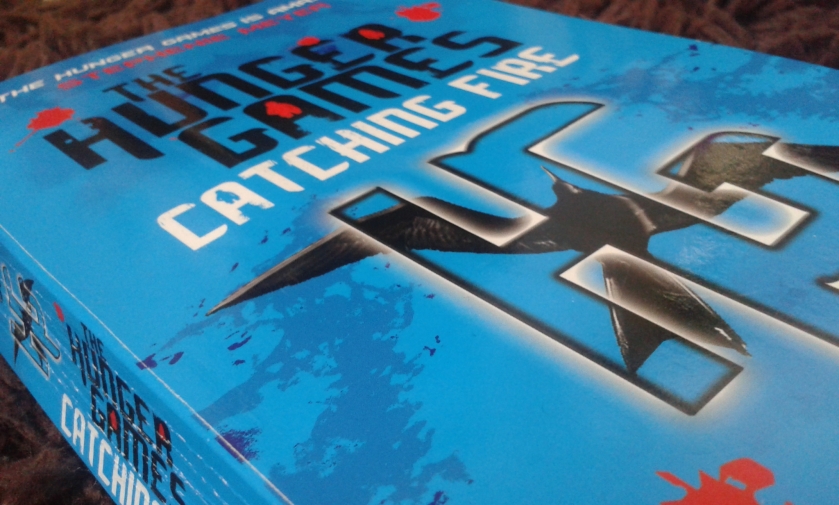 The second book in The Hunger Games trilogy keeps you equally as enraptured as the first. I had previously seen the Catching Fire movie, and had to go back and watch it a second time after reading this because I thought I had missed something – which I hadn’t, as such. The whole of the first TWO THIRDS of this book are crammed into the first 5-10 minutes of the movie! Which is a shame really. Most of the political and social commentary takes place before Katniss and Peeta find their way back into the arena. I guess the movie is supposed to be more action-oriented, but the action makes so much more sense when you understand WHY they are fighting against the oppression of the government.

Parts 1 and 2 cover Katniss’ new life in District 12, and how she copes with the “fame” and the new lifestyle that being a champion of the games provides. In order to keep the powers that be happy, the wedding between K & P is being planned and treated as a “reality show special” for those following the news in the Capitol. Katniss continues to go hunting, but she no longer has to bring in the food for her own family, instead she looks after Gale’s. Her (non)relationship with Gale is, of course, very difficult for her to come to terms with; particularly once the “wedding” is announced.

There are snippets of information that Katniss learns of uprisings in other districts by accidentally viewing transmissions meant for the officials of D12. In addition she becomes aware of the resistance, the existence of district 13, and the significance of the Mockingjay symbol, when she encounters some escapees in the woods.

Supposedly the special rules for the “Quarter Quell” games (every 25 years) were written decades before; but we’re led to believe that this is a sham when Katniss and the other champions are summoned back to fight each other.

Only when we get to Part 3 of the book to we get back to the Arena.

In my opinion the book was WAY better than the movie, just in terms of packing more of an emotional significance to the story lines. The greater detail in the politics, the resistance factions, etc. all bring a huge richness to this world. In short, it’s brilliant!